If you or your household receive an eviction notice for nonpayment of rent, call 2-1-1 immediately to learn about rapid-payment rent assistance that may help you avoid eviction.
Update December 1: Masks are required in indoor settings in Oregon whether vaccinated or not.
Cheap, counterfeit opioid pills containing fentanyl are thought to be fueling an increase in fatal drug overdoses across the Portland Metro region. The deaths include teens and other people who didn’t regularly use illicit drugs. 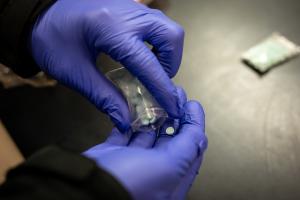 To address this accelerating trend, Tri-County Health Officer Dr. Jennifer Vines today is issuing a warning against consuming any pill not obtained from a pharmacy. She urges people who use illicit drugs to take added precautions, and asks medical providers to highlight these risks. She also recommends anyone who uses drugs or knows someone who does, to carry multiple doses of the overdose-reversal drug naloxone (name-brand “Narcan”).
“People should assume that any pill sold on the street contains fentanyl, no matter how authentic it might look, said Regional Health Officer Dr. Jennifer Vines. “Taking any pill laced with fentanyl can be fatal.”
[Watch April 20 press conference]
Health officials are concerned about pills, called “Blues” for their common color, or “M30s” for the stamp commonly found on each pill. The tablets are so well-made that even experienced users say they can’t tell the difference between a counterfeit pill and a pill manufactured by a pharmaceutical company. They are often meant to appear like the common pharmaceutical-grade painkiller oxycodone.
However these pills are laced with fentanyl, a powerful synthetic opioid, similar to morphine but up to 100 times more potent. Because the laced pills appear so authentic, health officials are especially concerned about people who pop a pill at a party and young people who favor pills over other forms of drugs.
Public health workers are also concerned about people who regularly use illicit drugs, but they note many of those individuals are more familiar with the risk of counterfeit pills. Many already say they assume pills purchased on the street contain fentanyl.
Fentanyl is prescribed by doctors for pain. But fentanyl is also increasingly made illegally and distributed as a street drug and mixed — often unknowingly to the user—with other drugs, such as opioids, methamphetamines, ecstasy and benzodiazepines.
Fentanyl can make a person stop breathing and counterfeit pills are especially dangerous because the amount of fentanyl varies from pill to pill, even in the same batch. Just two milligrams of fentanyl — the weight of a mosquito—in a pill could mean death. Even people who have a high tolerance for opioids face an increased risk of death.
Regional emergency response to opioid overdoses the last week of March were the highest they had been since the region began tracking a few years ago.
In Clackamas County, for example, emergency calls for opioid-related overdoses more than doubled in the first three months of 2021, compared to the same time last year. Meanwhile fentanyl-related emergency-room visits have more than doubled.
The rise comes after an already deadly year in Oregon and across the nation, where overdose deaths spiked then remained elevated, even as prescriptions for opioids continued to drop.
The Centers for Disease Control and Prevention issued a health alert in December because of an increase in synthetic opioids that hit the western United States — and the Interstate 5 corridor — hardest. Law enforcement and medical experts say illegally manufactured fentanyl is to blame.
Officials are particularly concerned about the risk to young people because they are more likely to swallow a drug than inject it.

Investigators are tracking advertisements on social media platforms such as SnapChat. Officials fear young people will find pills especially appealing — they’re cheap, more socially acceptable than meth or heroin, and don’t have a tell-tale smell like alcohol or marijuana. Youth who use pills are also less likely to have access to the life-saving, overdose-countering drug naloxone.
Beaverton School District Superintendent Don Grotting said students in his district have died from these pills in the past year.
“These students thought that they were purchasing Oxycontin or Xanax on social media,” he said. “They had no idea that they were getting deadly fentanyl. They had no idea that one pill could kill them. Educating our students about this danger has become one of our highest priorities.”
Because it basically takes an expert to tell a fake pill from a real one, the best way to prevent an overdose from counterfeit pills is to avoid any pills from friends, sold on the street, or obtained through web sites that don’t require a prescription, said Multnomah County’s Harm Reduction Program Supervisor Kelsi Junge. Counterfeit pills are not all the same, either, so that even if one counterfeit pill seems ok, another pill from the same batch could kill a person.
People who do choose to use pills outside of a care plan developed with a healthcare provider should take steps to reduce the risk of overdose, Junge said. Don’t use when you are alone, in case you or someone you’re with starts to overdose. Signs of overdose include:
Pale or clammy skin
Bluish or pale lips and fingernails
Limp body
Slow or no breathing
Vomiting or foaming at the mouth
Difficult to or not able to awaken
Naloxone, a medication that counteracts the effects of opioids, can reverse an overdose. Oregon’s Good Samaritan Law will protect both the person who administers naloxone and the person who is overdosing from prosecution.
Anyone who uses illicit drugs can get free fentanyl test strips and naloxone kits through Multnomah County Harm Reduction. Learn more at multco.us/harmreduction. A person can test a pill with a fentanyl strip before consuming. 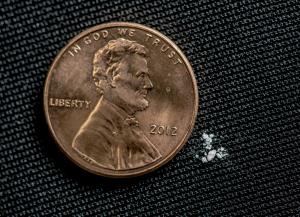 Two milligrams of fentanyl, shown here, is enough to kill someone. Photo courtesy of the DEA