STORY CONTINUES BELOW THESE SALTWIRE VIDEOS
KENTVILLE, N.S. — A new building in Kentville represents stability and sustainability for a program that is training doctors, who organizers hope choose to stay and help alleviate the family physician shortage in the region.
Dr. Roop Conyers is the post-graduate site director for the Dalhousie University Annapolis Valley Family Medicine Residency Training Program. He said that although the program began in 2012, only now does it have a bricks-and-mortar home.
“Prior to having this home, we struggled to find space in the hospital here to have lectures,” Conyers said.
This sometimes led to a somewhat “unpredictable” and “chaotic” learning environment.
He said the $1.47-million facility, built on the Valley Regional Hospital grounds, represents a significant investment by the Nova Scotia Department of Health and Wellness, Dalhousie Family Medicine and the Nova Scotia Health Authority. 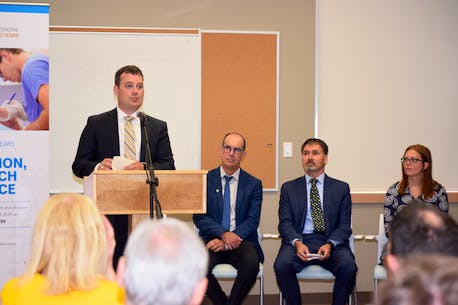 Family medicine training program will benefit Cumberland County
Province to create 10 new family doctor residencies
Kentville is the only location that required a new building.
Aside from a few finishing touches, construction has been completed and it’s expected to officially open later in January.
Conyers describes the new facility as “the functional heartbeat of post-graduate training in the Valley.” It will support the clinical and academic training needs of doctors. It will also provide accommodations when residents are on call overnight at the Valley Regional Hospital.
In part, he sees the investment as recognition of the work already done through the program. He also sees it as a demonstration of a future commitment to the program.
Conyers said the building represents a vision and years of work and planning by many people coming to fruition.
He said they have to remain mindful of the clinical and academic needs of family medicine residents, as well as other needs. The medical residents have a collective agreement they must abide by, and part of that includes having a physical entity to house the program.
As with other ongoing doctor recruitment and retention efforts, the ultimate goal is to help alleviate the shortage of family physicians across the province.
Conyers said his goal when starting the program was retention, getting medical residents involved in life in these communities, so perhaps they would put down some roots.
His hope was to retain one new family physician for the Annapolis Valley per year, which has been surpassed every year since the program’s inception.
As of last year, the program has graduated 38 new family doctors. Thirty-one remain in Nova Scotia, with about two dozen remaining in the Annapolis Valley region.
Conyers said most program graduates have trained to become competent, full-service general practitioners.
They take on five family medicine residents a year, four medical grads from Canada and one international placement. It’s a two-year program, so they currently have 10 residents in training. Conyers said they’ll be taking on six new residents this year thanks to the new space, so increased program capacity will benefit from having a designated training facility.
He said the dynamic of having a mix of first- and second-year residents at any given time is beneficial, as the first-year residents can learn from the challenges and successes of the second-year residents.
When Conyers started the program, it was the first of its kind in the country. He said the catalyst was the College of Family Physicians of Canada’s introduction of competency-based curriculum training.
“This program has laid the foundational framework of competency training in Nova Scotia but also has been a framework in Canada,” Conyers said.
He said the training is not just centred in Kentville. Valley residents have been purposely placed in five communities, the others being New Minas, Berwick, Middleton and Annapolis Royal.
Conyers, an assistant professor in Dalhousie University’s Department of Family Medicine, is also the medical site lead for the Annapolis Community Health Centre. The clinician practises family and emergency medicine in Annapolis Royal and said he is a physician at heart.
Breanna Hall, physician community navigator with the Annapolis Valley Chamber of Commerce, said she recently had a tour of the new building.
“I do believe the new facility will attract an increased interest for more students to do their residency with us,” Hall said.
She said residents will be well supported with a high-level training facility that can deliver everything they’re looking for. The building will serve as a community hub for them while they’re training, providing a feeling of “home away from home.” Some students doing their electives in the Valley this year have already requested tours.
Hall said she and the Annapolis Valley Collaborative Coalition for Doctor Retention and Recruitment are excited to continue working with Dalhousie Family Medicine to promote more community engagement. Initiatives include hosting special events for the residents, COVID-19 pandemic permitting.
She said the residency training program has historically been very successful in retaining new family doctors in the Annapolis Valley. Four out of five chose to stay last year following their second year of residency.
Hall said they look forward to enhancing programming developed with Dalhousie to ensure that they have “a great retention program that supports all 10 of the family medicine residents that are in the Valley each year.”
Kirk Starratt is a multi-media journalist with the Annapolis Valley Register. He can be reached by email at [email protected] .
Ensure local journalism stays in your community by purchasing a digital membership today.
Pay only $0.99 a week for the first year.
Start your Membership Now
Your home for the news
shaping Canada’s East Coast.
$0.99/WEEK
FOR YOUR
FIRST YEAR
UNLIMITED DIGITAL ACCESS